First days in Chiang Mai, Thailand as a Digital Nomad

I arrived in Chiang Mai, Thailand last Friday and so far have been having a blast here. I made a few clips of video here and there, which I cut together, you can watch it at the bottom of this post.

The flight over was my first ever intercontinental flight and I was prepared for the worst. Everybody always says flying Economy Class sucks. I guess it must be because my expectations were so low but I actually enjoyed most of the flight. The food was okay, the seats were comfortable enough. And I managed to get a seat by the window, which got me a great view during the first half of the flight (after that it got dark). I actually flew right over my old house when leaving from Amsterdam, then had a nice view of the rest of Europe, the Black Sea and the deserts of Iraq, Iran and Afghanistan. After that I watched a bad movie and tried to get some shuteye (didn’t really work unfortunately).

After a 13 hour flight, I landed in Singapore, where I would wait for about 3 hours to catch my new flight to Chiang Mai.

Something really amazing happened though. I met Erin and Simon from neverendingjourney.com on the airport. They were actually on the same flight I was on, going to Bali. I’ve been reading their blog before and they’ve really inspired me to start on my own journey. The coincidence of meeting them right there on my first day as a Digital Nomad, it’s like Universe wanted it to happen that way…

I did some work (yes, I still do that now and then) on the airport there.

The flight to Chiang Mai was a little more basic, but quite short and I had 3 seats to myself, which was nice. Once there I had to go through immigration, waiting in a long line. Luckily I already obtained a 3-entry visa, so I didn’t have to wait twice.

The area surrounding the airport was very quiet (as well as the airport itself, I just came from Singapore which is a huge and very busy airport). I jumped into a taxi bus into town. The airbnb place I rented for the first few days wasn’t available for about 2 more hours yet though, so I just found a nearby coffee shop with wifi to get some work done.

Once I arrived at the apartment, the key wasn’t where it was supposed to be. Luckily there were two other travellers there with the same issue, turned out the cleaning lady just wasn’t done yet and was inside. My apartment’s pretty basic, just a bed, table and bathroom. But it works for me, I don’t spend much time there anyway.

I went into the city and the first thing I noticed is that it’s very pedestrian unfriendly here. So, as soon as I found a bike shop (which came recommended), I rented a scooter. Unfortunately I’d never driven one before, so I needed some quick lessons on their parking lot. The guy was friendly though and let me rent it anyway, even though the gravel wasn’t the best place to learn to ride. I fell while breaking and got a small scratch on my knee to remind me. Once on asphalt it turned out to be a lot easier. Traffic here is relatively slow (40 km/h is the maximum speed) and cars usually give way to motorbikes.

Friday afternoon there was a Digital Nomad meetup organised by Johnny from http://www.johnnyfd.com/. I knew him mostly from his podcast, Travel Like A Boss Podcast, where he interviews other Location Independent Business Owners.
It was really great to meet fellow Nomads, as it’s been quite lonely not having like minded individuals around me back home for a while. Sure I talked to some online, but it’s not really the same thing as meeting in person.
We had a great time discussing Udemy courses, the having dinner and going to a bar for the rest of the night.

On Saturday I went out to look for an apartment. Johnny had given me a recommendation: Baan Thai, in the Nimman area where most Digital Nomads hang out. The place has a big shared pool and it’s a studio apartment. The most amazing thing is the monthly price though: 5,200 Baht. Which is like $140! That’s excluding electricity, internet, water etc, but it will still cost only like $180/mo total to live there.

I doesn’t have kitchen, but I don’t need one. You can find food practically everywhere here and it’s super cheap. Street food can fill you up for $1-2 if you really want, but to sit down and eat at a restaurant doesn’t cost more than $5 usually. And the quality of food is just amazing. Look at this delicious Papaya Salad (it was so spicy, I cried while eating it, but very nice) with Grilled Chicken, or the green Shrimp Curry I had later that day. 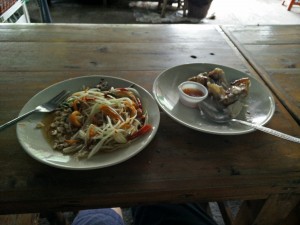 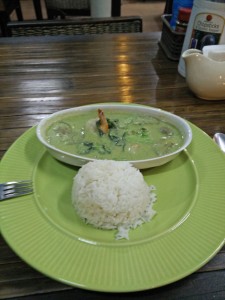 Sunday was my “tourist” day. I went to visit the Buddhist temples (Wat in Thai) in Old Town. The old Wat Chedi Luang was really impressive. In the afternoon I went to visit the Sunday Night Market, around the same area, which was extremely busy and big! In fact, when I wanted to go back home, I had to walk up and down for like 30 minutes more until I figured out where I parked my motorbike. 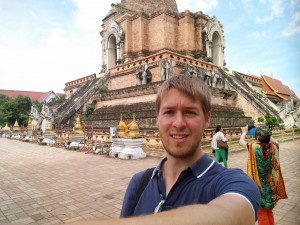 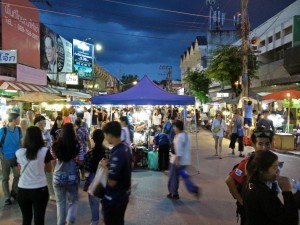 Today I worked most of the morning. Decided to drop my laundry off at a laundy service, why would I do it myself if everything is so cheap here, right? Better to spend some extra time working, I’ll be making more that way.

Maybe I’ll go ride out of town later today, haven’t been outside yet. I’m thinking of going to the Zoo or riding up to Doi Suthep (the mountain next to Chiang Mai). Let you know tomorrow…